You might remember that I am running this blog on Ghost self hosted on Azure. I've written about how I've migrated from Wordpress here.

It turned out that upgrading to newer versions of Ghost wasn't as easy as I thought. I've installed Ghost in an Azure App Service from this Github repository by Felix Rieseberg, and I was relying on his Ghost-Updater-Azure tool for the updates. The update tool worked only once for me. That took me to Ghost v0.78. For the next versions it didn't work anymore. It was just doing nothing without any error message. Each time I tried to manually upgrade to a newer version it took more than a couple of hours, so I've quit each time.

Last year, Ghost announced a major release, version 1.0, and I was still on v0.78, so I had to migrate. I started with three migration goals in mind:

I started from the official Migrating to 1.0.0 guide, which made it clear that I will need a new fresh installation to which I should copy and import my theme and the content.

Given my previous experiences with upgrading Ghost, I was happy to see that they now provide this Ghost-CLI tool that is supposed to install, configure and upgrade Ghost through simple command line commands. Unfortunately, it doesn't work well on an Azure Web App based on Windows, so I didn't succeed in using it.

Trying to get to a more reliable way of upgrading in the future, I insisted to use the Ghost-CLI and I tried to install it on an Azure App Service running Linux. I have found this tutorial which should help me do it: https://ourwayoflyf.com/ghost-v1-0-on-app-service-linux/.

This may be a good path for someone who is familiar with NodeJS, MySQL, Linux stack. That's not me :( I got stuck at the Knex Migration error that is also mentioned in the above blog.

After the deployment which I did with the provided template, I got Ghost v1.22, so a good opportunity to use the ghost update command (part of the Ghost-CLI tool) to try an update. It gave the error:

A database migration error. Might be a bug in the Ghost-CLI or in this Ghost version or simply something wrong with the Docker image I was using. Anyhow, it didn't seem like a good or a simple path for me to continue on, so I've dropped it.

First, I have made a fork, so I can do the customizations needed for my blog.

For upgrading to next version of Ghost, my plan is to keep this fork up to date and Sync it with the Azure App.

Once the latest Ghost version is merged in my fork, the next step would be to test that it works for my blog. Having the repo cloned locally, I can easily run the blog on my machine and do the checks. If I want I could also copy the latest content (DB and images) from the server, through FTP, to see that the DB gets migrated to latest version and that everything works as it should.

Then, if all good, I should push the changes to the onCode branch, which is the branch connected with my Azure Web App. The only thing left would be to go in the Azure portal and click Sync in the Deployment Options 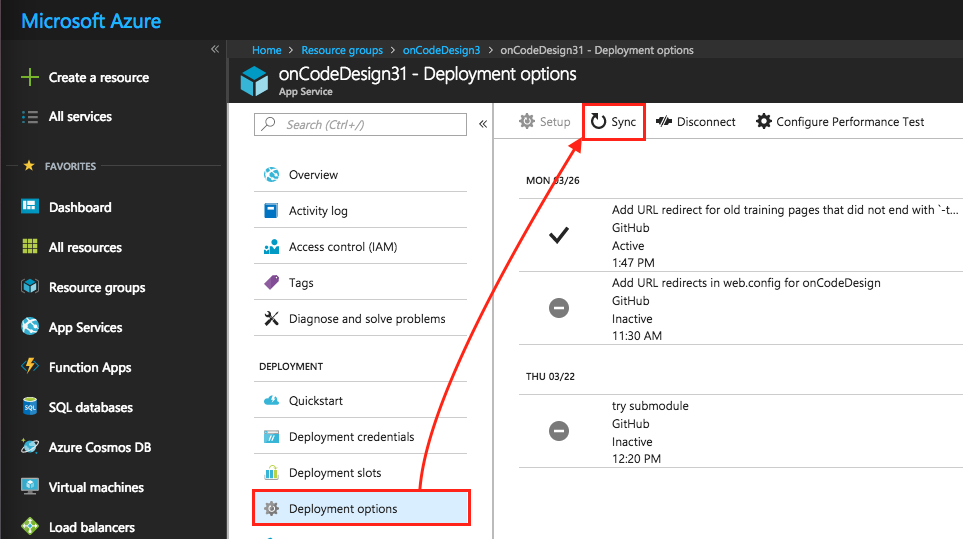 This is the plan :) I'll let you know how it works when I'll do the first upgrade.

I did the initial deployment using the Azure deployment template from the repository, following Radoslav Gatev blog post. 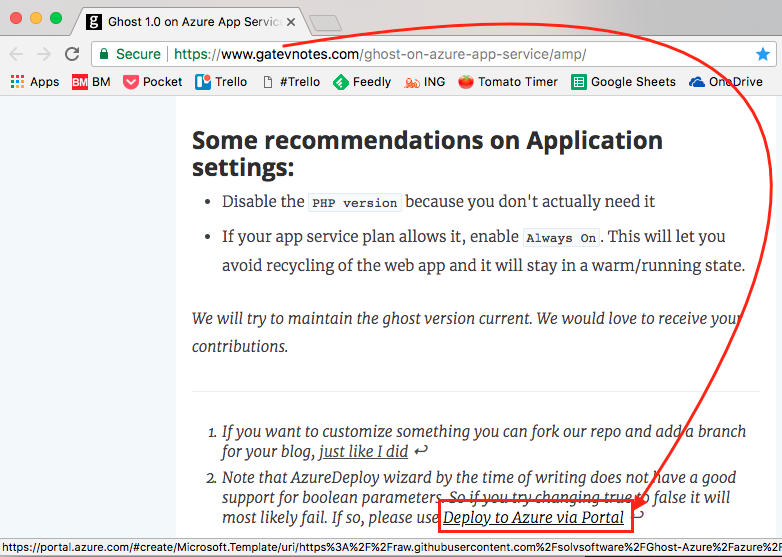 It did create all the resources, but it didn't set the application settings, which I had to configure afterwards in the portal. 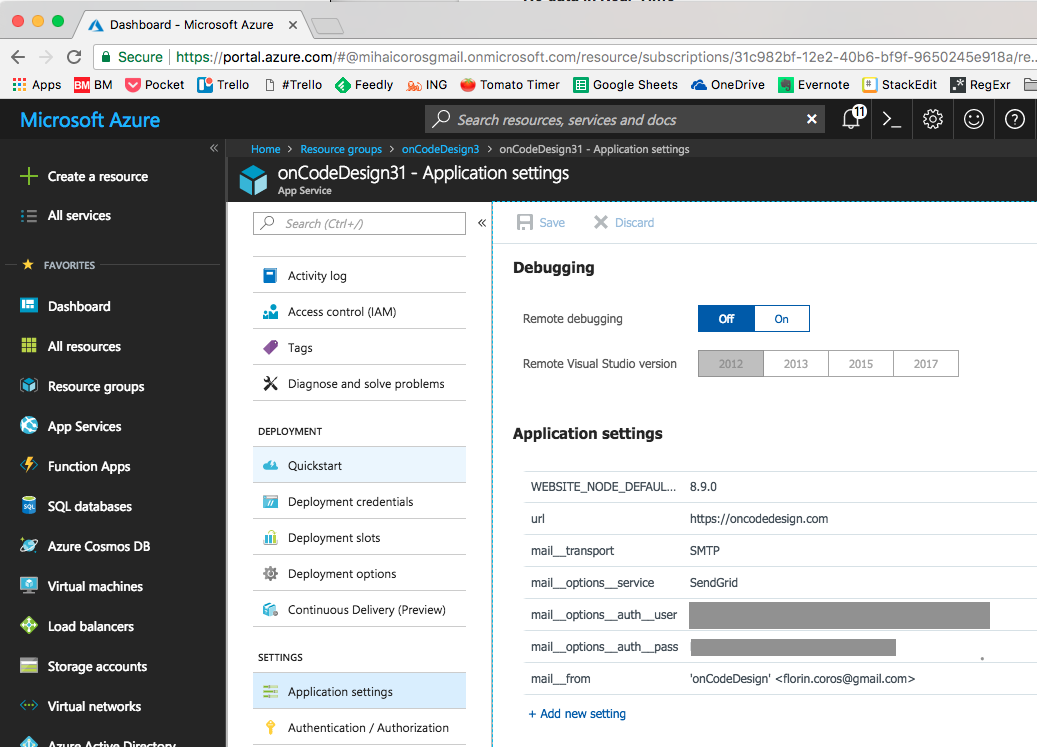 This wasn't a problem except for the WEBISTE_NODE_DEFAULT_VERSION. After the deployment, it was the only setting, and was 6.9.1. This setting says which node version the web app should use.

When I went into the App Service Editor, (which is very cool by the way) and executed in the console node db.js everything went well and it created the database. However, when I executed the npm rebuild it ended with some errors: 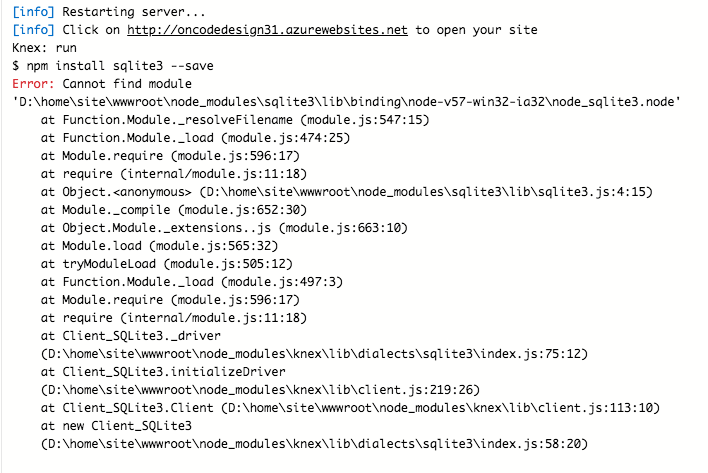 After some google-ing, I've realized that the problem was the node version, so I've set the WEBISTE_NODE_DEFAULT_VERSION to 8.9.0, reran the npm rebuild, and then everything was working. I had a fresh installation of Ghost in Azure App Service.

Following the migration guide this should have been an easy two steps thing:

My problem was that the export from the old site didn't work. It didn't give any error in the Settings page, but when I ran it locally with verbose logging, I've seen the error in the console:

Somewhere was a bug in Ghost. Either when it migrated the DB from a previous version to 0.78, either in the export functionality.

The trick I did to get my content was the following:

Add the Theme as a Git Submodule

The next step was to add the onCodeDesign theme to my new Ghost 1.19 installation. There are usually two ways to do this:

I didn't choose any of these. The reason is that I already keep my theme in a git repository on visualstudio.com in VSTS, and I don't want to loose all the history on how it was developed and modified. None of the above were a good option to have an easy deployment of future changes on the theme, and also to keep the history in git.

My solution was to add the theme as a git submodule to the GitHub repository of my blog. The submodule went into the content\themes\oncode folder, and it pointed to the same remote in VSTS. This, not only that preserved the history, but it also allowed me to keep the same repo for the theme which saved me some work.

The difficulty here was to setup the authentication to the theme repository on VSTS, which was not a public repo. When, Azure fetches the changes from the GitHub repo, it also needs to update the submodule, so it needs to have access to it. One solution would have been to use a SSH git URL to the submodule to the VSTS. This wasn't an option for my case because I use git-lfs (the theme repo has many images) and VSTS does not support git-lfs over SSH. Therefore, I had to configure a Personal Access Token for a new user in VSTS, and keep a HTTPS git URL.

The biggest advantage of this setup is that now, in my local clone of the repo I can do and test any changes to the theme. When I'm done, I just push the changes to the onCode branch, I go in the Azure portal and make a Sync and the changes are up.

The next step was to upgrade the theme to work with Ghost 1.x. This was a straight forward process. When I've activated the theme, it gave me some errors that I had to fix.

I've just followed the guide here and having the environment locally everything went fast and smooth.

Also, most of my images are on Cloudinary, so I didn't have too many to copy from one place to the other.

The last steps were to review the settings on the new installation. Things like title & description, publication logo, publication icon (much nicer than on v0.x), publication cover etc.

To make the email settings you could put them in the config.production.json as shown here in the docs. However I prefer to use the App Service - Application settings, so I don't put my Sendgrid credentials on GitHub in a public repo. 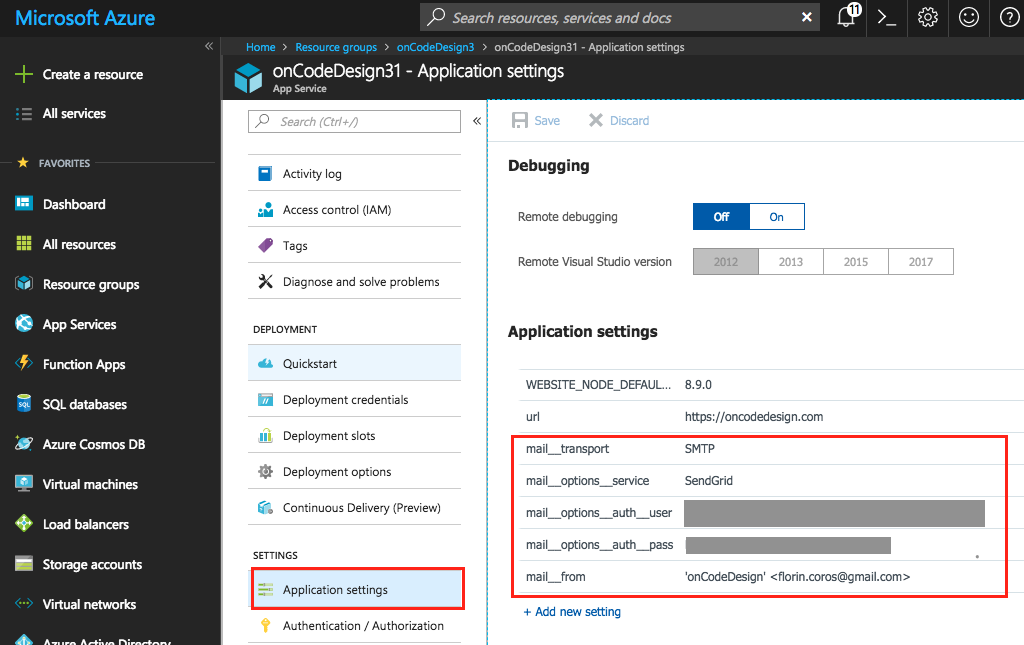 I do my redirect in the web.config as I've detailed in my post about migrating from Wordpress here.

In the previous installation I didn't had a nice way to deal with these. I set them up using the App Service Editor and that was it. Luckily they didn't need changing. Now, with my new setup of deploying from GitHub, I've just copy them in the new web.config which is part of my repo and just redeploy.

Ghost v1.x has support for uploading the redirects in a json file (Labs screen), but I just prefer the above to have them in the git history.

Switch the DNS and Setup the SSL

I run my site through Cloudflare for all the benefits in security (SSL, DDoS, etc) and performance.

This first thing was to go in Cloudflare and change the DNS setting to point to the new Azure App Service. Then, I've removed the domains from the old App Service and added them to the new one.

The oncodedesign.com got validated and was responding very fast. Almost instantaneously. I've added the SSL Binding using the Cloudflare certificate I already had setup in Azure and it was all good.

The www.oncodedesign.com didn't get validated even if it was changed in the DNS. I waited a day, thinking that I should be patient with the DNS propagation, but it still didn't work. After some reading I've switched off the HTTP proxy leaving DNS only for the www record

This did the trick. The domain was validated by Azure, and I could setup the SSL Bindind with the same certificate. Afterwards, I've switched it back to DNS and HTTP proxy and everything went well. Probably something was cached, and the new DNS record didn't push through.

If you find yourself doing such a migration and you get stuck don't hesitate to ask me, I might have gone through the same.