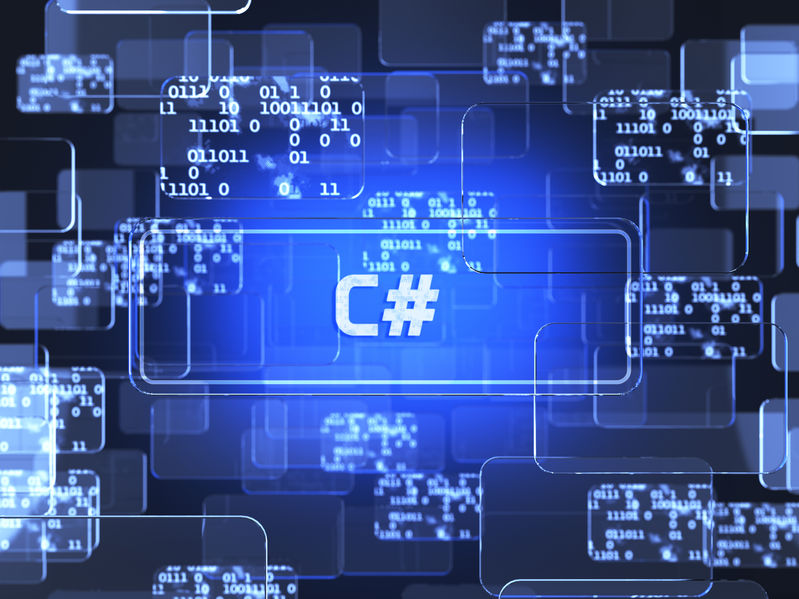 This is the last post from the series on how we could implement a design that allows to decide only at deploy time how two services communicate: in process if they are deployed on the same server or inter-process if they are on different machines. The first post shows where such a design is useful and what are the benefits it brings. The second one, takes an example from the financial systems world, and outlines the key design ideas on how to implement it. In this post we'll only focus on code. We'll take the example presented in the previous post and code it from scratch in C#.

Dependency Injection is the base technique to implement all the key design ideas detailed in the previous post. In this demo, we'll use the iQuarc.AppBoot, which brings on top of a classic DI Container, the support for implementing simple conventions for the type discovery and the proxies. (More on iQuarc AppBoot Library here)

The entire source code that we are going to walk through is available on Github, here, as part of my Code Design training. Each implementation step is marked with a tag in the git repo. We have ipc-step0 for the starting point and so on, until ipc-step10b. You can see how the implementation evolves step by step.

If we checkout the final step (ipc-step10b), we have what we wanted in the previous post: the ability to change the communication between the OrdersService and QuotationService to be in-process without changing code or recompile.

To get that running, after you build the TradingApp.sln you can find into the bin\.Deploy folder different deployments configurations (there are some post build events that copy the binaries in these folders). If you run the startAll.bat you will start three console processes, one for each of our three services from the example. They are all hosted by themselves, and each of them listens for REST calls on a different port (I've mentioned previously that we're implementing the example using REST services). Now, we can open Postman (or other similar tool) and fire some calls to them:

this gets from the QuotationService the quotations for the NYSE in a time window. You can notice that each console writes the calls it received and the remote that made it, so we can see what happens in our demo app.

If we make a POST to the OrdersService, to place an order:

we see the call logged into the console of the process that hosts the OrdersService (the remote is a Postman-Token outlined with yellow below, as for the previous call) 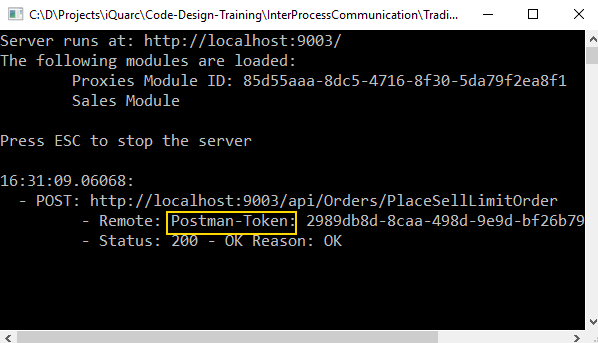 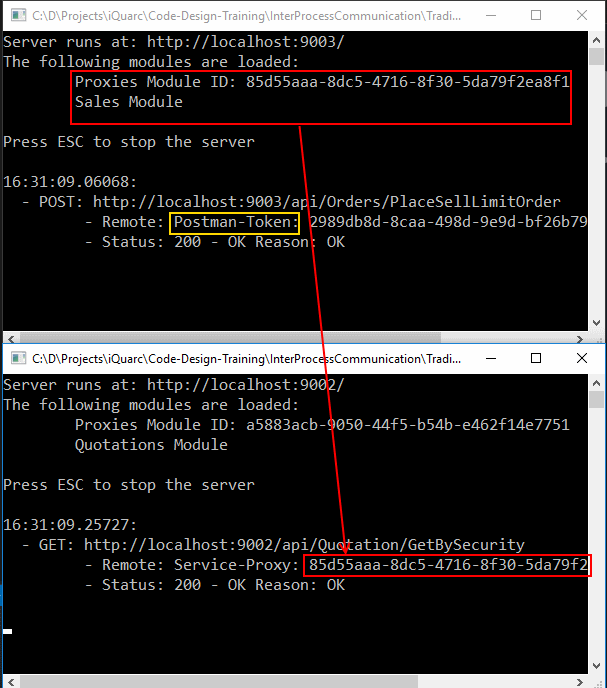 So we had an inter-process communication, the SalesService making a REST call to the QuotationService, when someone else made a call to it. 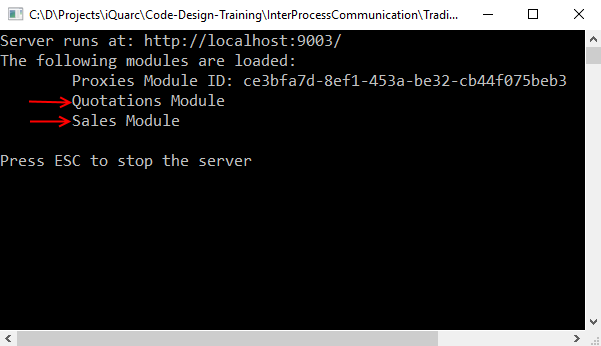 Now, if we repeat the same POST from Postman to the SalesService 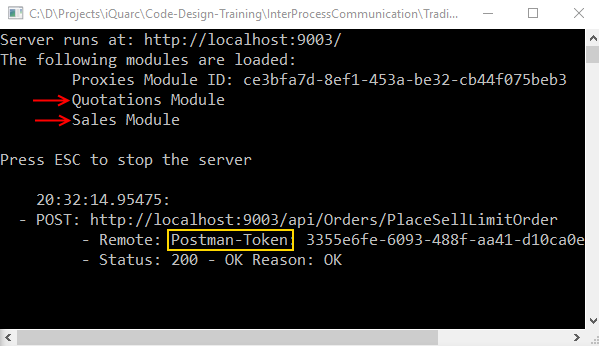 we see that no other inter-process call is made. Noting gets logged in the other consoles. The SalesService did call the QuotationService since it depends on it, but the call was just a function call in the process that hosts them both.

where each service was hosted in its own console host and an external call to the OrdersService triggered an inter-process communication with the QuotationServce, and we ended with a deployment like below

If we checkout the ipc-step0 we have the solution structure to start with. At this step all the projects are empty. 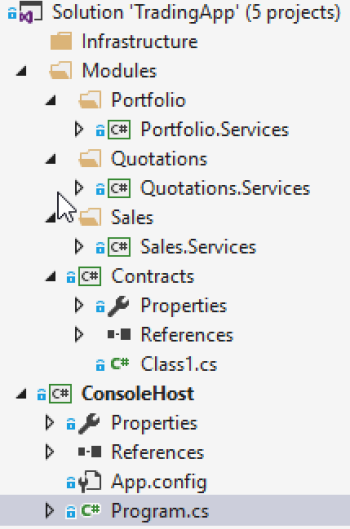 We have a console project (ConsoleHost), which will be our generic host. Then we have class library projects where we'll implement the services, and another one for the contracts.

The solution structure is a key element of our design and I have detailed in the previous post here, the basic rules we want to enforce with it.

Basic Code for Contracts and Services

Next, if we checkout ipc-step1 we have the contracts of the QuotationService, an interface for the service contract and a DTO for the data contract:

Next, we write a simple implementation for it, as a class in the Quotation.Services project (checkout ipc-step2):

Similar, we add the contract and a simple implementation for the OrderingService in the Sales.Services project (checkout ipc-step3). Notice here the dependency to the IQuotationService:

Similar at ipc-step4 we have the PortfolioService implementation in the Portfolio.Services project. It also has a dependency to the IQuotationService

As pointed in the previous post here it is a critical requirement for this design that the dependencies among the services are towards interfaces. So, the OrdersService class depends on the IQuotationService interface and not on the QuotationService class. The same is for the PortfolioService.

At this point we have service contracts and implementations for them but they are not linked in any way. If we look at the Project Dependencies Diagram we see that we have no references nor strong dependencies among them.

In the previous post here, we've detailed why this is important.

The iQuarc.AppBoot will bring things together. We'll use it for type discovery to find the service implementations deployed, and then to satisfy the dependencies by configuring the underlying DI Container.

So, the next step is to install and configure it. We can install it as a NuGet Package to all the projects under the \Modules folder.

The iQuarc.AppBoot package doesn't have dependencies to any DI Container, and it is not a container by itself. It uses a container by an abstraction. It is good to also keep our modules (the place where we implement the business logic of our system) independent of a specific DI framework.

However, the host project needs to use a specific container, so for it only, we will install the iQuarc.AppBoot.Unity, which adapts the Unity Dependency Injection Container to AppBoot.

The ConsoleHost is our generic server process. It should find all the services deployed, then publish them to be called from other processes and configure the dependencies. In a real system this would be an web app in IIS or a Cloud Service, or a Windows Service etc. For this demo it is a simple console app.

To use AppBoot to find the deployed services, first we need to decorate all the service implementations with the ServiceAttribute.

Now, as a first step, when the ConsoleHost starts, in its main() it will call AppBoot.Bootstrapper.Run() which will scan through reflection all the binaries in the output folder and look after the types decorated with the ServiceAttribute. The ones that are found are registered in the DI Container as pairs of interface - implementation. This configuration is in the helper class AppBootBootstrapper:

To get this running we need to make sure that at build all the binaries are put in the same folder with the ConsoleHost. This helps in debug, and is the place where we can come later to define different deployment configurations. The easiest is to set the build output path for all the projects. Here is how it should be for a *.Services project:

So at the root level, we'll have a \bin folder where all the projects get build.

For our demo purpose this is not that important. We just need to make the services available for REST calls, so a simple self host in the console app of the Web Api will do.

We see that at startup we kick the AppBootBootstrapper.Run() and then we call the ConfigureWebApi() helper. This configures the WebApi to use the AppBoot DI Container to inject the dependencies into the controller. Our controllers are trivial:

They get through constructor DI the service they should make available through REST and they just forward the calls to it.

To make our ConsoleHost truly generic we should make a generic ApiController which gets the service through DI and forwards the call to it, and then we should customize the WebApi to use through some conventions our generic controller. Definitely it could be done, but it doesn't worth for our demo, so we just create three dummy controllers for each of our services.

Now if we checkout ipc-step7b we have all of the above implemented. If we execute the ConsoleHost.exe we see that it loaded all the three modules, because they were all copied in this \bin folder. If we make the same POST call from Postman to the OrdersService it works and it will do an in process communication with the QuotationService.

Everything is hosted in one process, like a fat server, which does not scale.

If we delete the Quotations.Services.dll and run again the ConsoleHost.exe we see that it only loaded the two remaining modules: Portfolio and Sales. Now if we make the same POST call from Postman it returns a 500 Internal Server Error because the OrdersService did not find an implementation for its dependency to the IQuotationService.

What we wanted above, is that when a dependency is not found in the same process to make a REST call to another process where that dependency is hosted. To make this happen, we need to create other implementations to the interfaces describing our contracts, which know how to forward the call over REST. These are the Proxies.

The proxies are part of the infrastructure. They are just plumbing code, no business logic, and we want them deployed on all our ConsoleHost instances to be the fail over when a real service implementation was not deployed. Therefore, we put them in the \Infrastructure folder.

Their code is not that important for our demo

They use a HttpClient, they build the URL to the service they want to call, based on some conventions, and they make the REST call. The response is then returned to the caller. We can checkout icp-step8b to have the proxies for all our services.

To fix this, we need to extend the conventions AppBoot uses. The ServiceAttribute we've used so far, was just a convention that says to register to DI interface - implementation pairs decorated with this attribute. We can create a new attribute say ServiceProxyAttribute and register a new convention to AppBoot.

The convention is implemented as a IRegistrationBehavior, where we just return what should be registered to DI from a type that was found during the assemblies scanning. Checkout ipc-step9a to get these implemented and have all the proxies decorated with the ServiceProxyAttribute.

With these done (checkout ipc-step10), we have the design completely implemented. Depending on what *.Services.dll are copied at deploy time into the \bin of a ConsoleHost.exe we have in processes communication or inter-process communication. Checkout ipc-step10a to get all the configurations tweaked for an easy run, and then you can re-run the demo as we did in the beginning of the post. You can play with different deployment configurations by copying the *.Services.dll in different ConsoleHost.exe instances. Here's another deployment configuration